The numerous acronyms used to describe facilities management software are causing confusion among FM professionals according to a survey from FM software expert Service Works Group.

A poll conducted last month revealed that facilities managers use a variety of different terms to describe FM software, from CAFM and CMMS to IWMS, MMS and others, but many believe that they all offer broadly similar functionality.

But more than 40 per cent of respondents believe that, despite the plethora of different terminology, they all refer to the same type of product which offers similar functionality. Almost a quarter felt they were different tools, while another quarter were unsure, possibly confused, by the number of acronyms in this area.

In the UK, CAFM was by far the most popular term, cited by 55 per cent of facilities professionals, followed by FM software (16 per cent); IWMS (8 per cent); CMMS (9 per cent); FMIS (4 per cent); MMS (1 per cent); while 7 per cent used a different phrase. Since the poll was last carried out two years ago, there has been a marked move away from using the term CAFM: in 2012 65 per cent of UK respondents reported using the term to describe facilities management software. 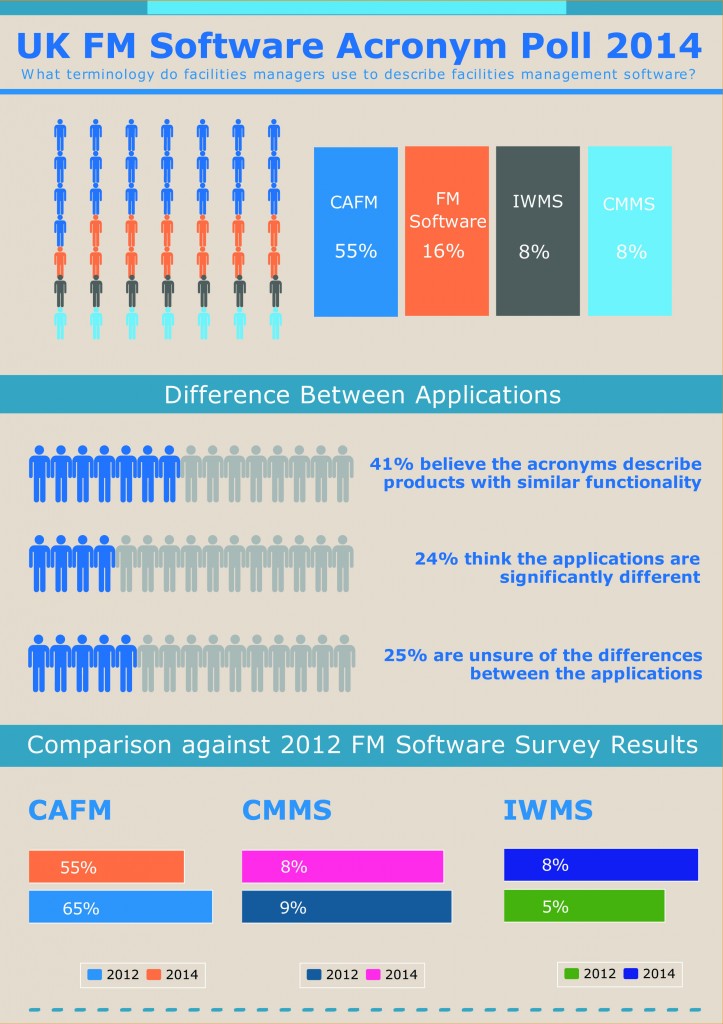 The picture is slightly different in Australia where facilities professionals prefer the more simplified FM software term (cited by a third of respondents); with CMMS a close second (26 per cent); and CAFM (11 per cent).  This is very different from the 2012 poll, when just 2 per cent used FM software with CMMS (32 per cent); MMS (20 per cent); CAFM (13 per cent) being more popular options.

“The FM sector is full of acronyms, especially in the field of technology; many of which have been created by software vendors in an attempt to differentiate themselves in the market. However the wide range of acronyms and the lack of terminology definition are causing confusion about the varying functionality offered by these systems,” says Gary Watkins, CEO, of Service Works Group. “Our own experience shows that facilities managers are using their FM software, CAFM, MMS, CMMS, IWMS, not just for reactive and planned maintenance, but for a variety of tasks including resource management, capital projects and space management, all of which are essential facets of the current expectations of what FM should be delivering. The landscape of facilities management software is changing at a significant pace, to a more widely-integrated one; in which the FM department shares data with other areas of the organisation, as part of a broader enterprise-wide solution, in which a constant flow of information is distributed, analysed and actioned to deliver company-wide benefits and efficiency.”